"Until recently, Facebook advertisers were allowed to cover their ad images with no more than 20% text. To adhere to guidelines, those who paid for reach on the platform were forced to use a tool developed by Facebook that divided ad images with a 25-rectangle grid (it’s since been replaced with a different tool, but more on that later). If your text took up more than 20% of the rectangles, the ad wouldn’t be allowed to run.
The tool was largely ineffective and depended on the position of the text more than it did the amount of text:

If you’ve never advertised on the platform, you’re probably wondering what the big deal is.
What it comes down to is noisiness — news feed saturation. When any of Facebook’s 1.65 billion users log into the platform, their networks share an average of 1,500 stories per day. That’s 1,500 posts the social network’s algorithm has to prioritize in your news feed.
Do you want to see the sonogram of your coworker’s baby or the video of your cousin surfing the waves of San Diego? Would your rather read your mom’s politically charged status update, or marvel at the watercolor self-portrait your friend just finished?
You don’t get to decide, Facebook’s algorithm does. And somewhere in there it needs to make room for advertisers. That’s when text overlay on ad images comes into play."
[via https://instapage.com/blog/facebook-20-text-rule]

"Not long ago, Facebook Product Marketing Manager, Afsheen Ali, reached out to Jon Loomerto officially address the rumors regarding the 20% text rule:
“Our research has shown that people demonstrate a preference for ads with less text. Previously, if 20% of an ad image’s area was text, it was not approved to run on Facebook, Instagram or the Audience Network. We’ve heard from some advertisers that this can be confusing, as it’s not always clear that an ad does not meet the policy requirements until after creative has been submitted. We are shifting to a new solution to improve this experience which allows advertisers more flexibility while still allowing us to maintain an enjoyable experience for people.”
More flexibility for advertisers and an enjoyable user experience? It looks like a win-win at first glance. But, in reality, the 20% rule hasn’t changed that much at all.
Under Facebook’s new guidelines, an ad won’t be outright rejected if it contains more than 20% text, but it  will have its reach limited — in some cases significantly.
Instead of using a “run or reject” system, Facebook will now categorize your ad according to the following ratings:

With Facebook’s new text overlay tool, you can upload an image to see what the chances are it will have its reach restricted. We put a couple of our own images to the test…" 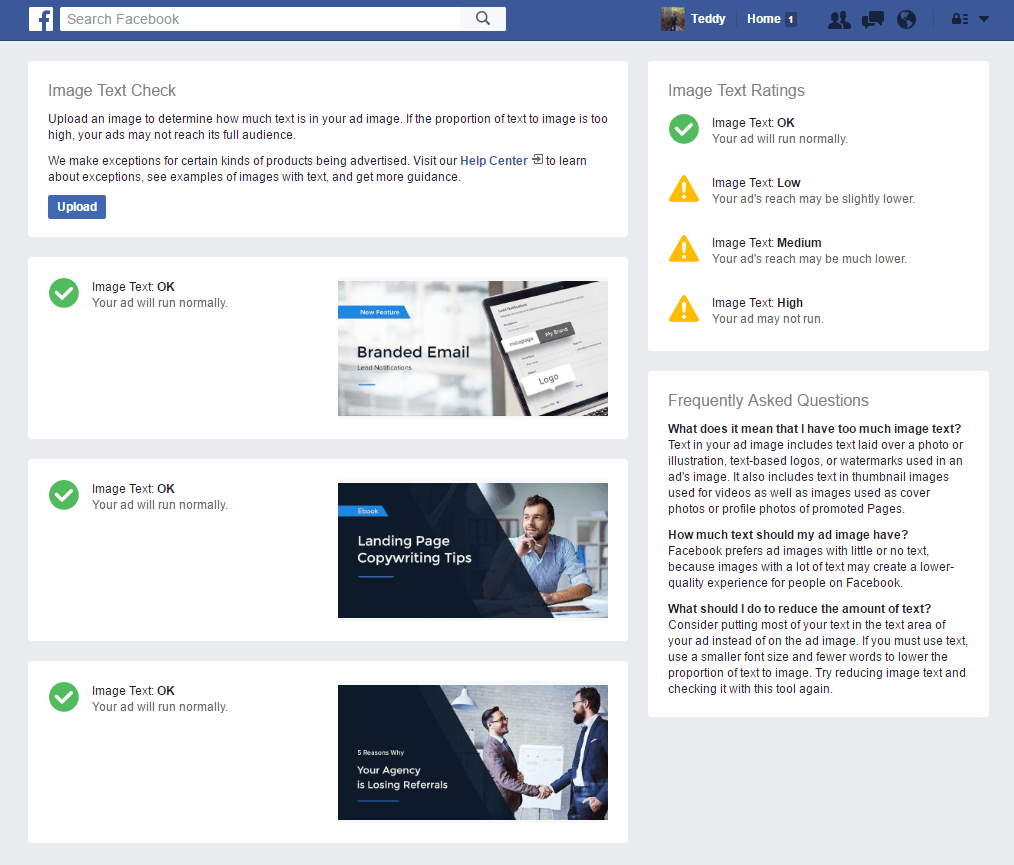